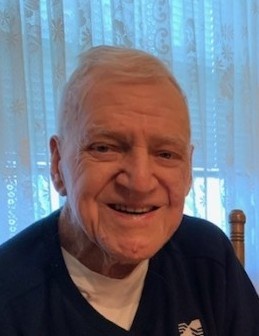 Harry R. Holthausen, 90, resident of Little Egg Harbor NJ and previously from Columbus OH, passed away on Sunday, March 15, 2020, in his home.  He was born in South River NJ.  He served his country on the Navy’s carrier USS Saipan during the Korean war, while he also traveled the world playing sports on the coveted Navy Athletic squad.  He attended Rutgers University, where he played football, graduated with a bachelors in engineering and a masters in economics.  He worked for several organizations like Dupont and Celanese, but finally retired from Worthington Industries as President of their plastics division.  He volunteered at a local hospital in Columbus on the pastoral visitation staff, served multiple rolls in local churches where he resided. He volunteered doing landscaping and cleaning for a funeral home until he was 90 years old.  Throughout his entire life, he loved and supported his family in many, many ways.  Harry is survived by his daughter Rae Kirkbride-Bonaventure (Jeff), granddaughter Katelyn Kirkbride, many dear family members in NJ as well as many who considered Harry their family and dear friend.  Harry was preceded in death by his loving wife Jean S. Holthausen.  A memorial service will be held in NJ at a future date, at the Maxwell Funeral Home, Tuckerton NJ.  If interested, donations can be made to the American Cancer Society (www.cancer.org) as Jean was a 2-time cancer survivor and cancer is the illness that inflicted Harry in his 90th year.  He would want all to know, he was ready to go Home to meet his Glorious Savior Jesus, and he would like all of you to accept the Lord’s free gift of salvation so he will see you again in Heaven.

To order memorial trees or send flowers to the family in memory of Harry R Holthausen, please visit our flower store.