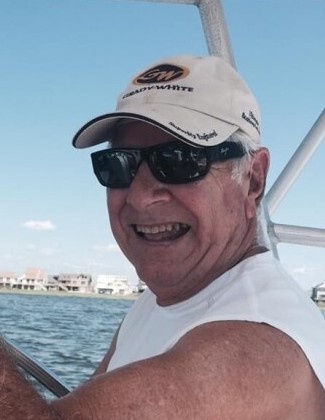 Jim married his childhood sweetheart Marian, they had two sons Craig, who pre-deceased him, and Jeff.  He has officially seven grandchildren, but really enjoyed 15, since they more or less adopted Marian’s sister’s children when she passed much too early.  He had one beautiful great granddaughter with another due in August.  They lived for many years in Rutherford then Voorhees before moving to the Southern Jersey Shore for a home on the water & a condo in Islamorada in the Florida Keys. They would have celebrated their 61st anniversary on June 6th of this year

Jim enjoyed so many things, travel, especially his trip to Italy, cruising, family holidays, which were usually overflowing with food, laughter and love, and of course boating & fishing. He loved his trips to Panama & Costa Rica with his son Jeff & friends.  He served on the Board of Directors at his condo, Beacon Reef, including many tears as Treasurer. High on the list of things he enjoyed would be people, he loved talking and interacting with all types of people, from all walks of life and all ages. This characteristic earned him the “honorary mayor of Islamorada” title several years ago at the condo.

Jim worked over the years for several Fortune 500 companies, and then about 35 years ago started his own company, Sealtec, which is still family owned & thriving.

To order memorial trees or send flowers to the family in memory of James George Cairoli, please visit our flower store.