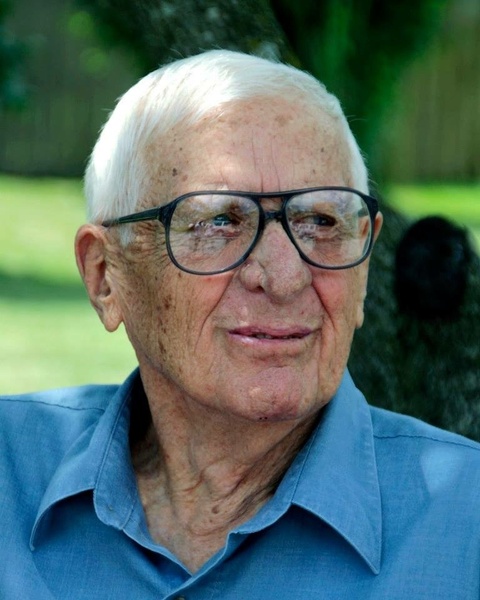 Dr. John Robert Leach, 93 a College Professor for 35 years and resident of Little Egg Harbor, NJ since 1982, died on October 23, 2015. Born in Snyder County, Pennsylvania on September 23, 1922 he was the son of Clayton E and Blanche (Attinger) Leach. He was predeceased by his wife of 62 years, Elizabeth Anne (Miller) Leach, and two brothers- Donald R and Clayton E Leach.
He is survived by his son, John Miller Leach, his daughter-in-law, Margaret Mary Leach and three very special granddaughters, Amanda Dolores and twins Mary Elizabeth and Kristen Elizabeth- all of Little Egg Harbor, NJ.
During World War II he was a member of the 314th US Army Band, serving nearly three years in Africa, Italy, France, Germany and Belgium.
Following graduation from Susquehanna University, Sellinsgrove, PA and prior to completing his Doctorate in Music at Columbia University, he taught in the public schools in Troy, NY. Dr. Leach served on the faculties of Susquehanna University from 1950 to 1959, Augustana College in Illinois from 1959 to 1965 and Jersey City State College (New Jersey City University) from 1965 to 1985.
He was a director of bands at Susquehanna University and Augustana College and directed a choir at Jersey City State College. During his career, he served as choir director or organist at churches in Pennsylvania, Illinois, Iowa and New Jersey.
He was instrumental in establishing a Master of Arts degree program at Jersey City State College and served as its graduate music coordinator from 1969 to 1982.
Dr. Leach was the author of a college music textbook and several articles in professional journals, and served as a member of the Board of Trustees at Upsala College, East Orange, NJ from 1970 to 1976.
He was a member of the American Association of University Professors, Music Educators National Conference and its affiliated state chapters and the American Guild of Organists (New York City and Atlantic City chapters).
His biography is published in the ""International ""Who's Who in Music, Cambridge, England (1975), ""Who's Who in the East"", USA (1974), Dictionary of International Biography"", London, England (1972) and ""Contemporary Authors"" USA (1970).
There will be a private committal service at the Chapel of the Veterans Memorial Cemetery, Arneytown, NJ. In lieu of flowers please make donations to the Good Shepherd Lutheran Church 500 Mathistown Road Little Egg Harbor, NJ 08087.
Maxwell Funeral Home, Little Egg Harbor is entrusted with arrangements.

To order memorial trees or send flowers to the family in memory of John Robert Leach, please visit our flower store.
Send a Sympathy Card