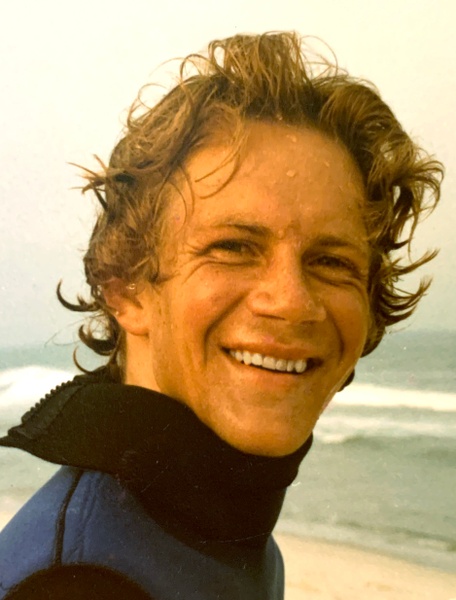 Kurt Alan Horensky, 59, of Beach Haven, passed away peacefully at home on August 7, 2019 after a courageous 3-year battle with cancer.
Kurt was born in Plainfield, NJ on March 13, 1960.Ã‚Â  At an early age he started swimming competitively.Ã‚Â  Ã‚Â It didn't take long for Kurt to trade the pool for the ocean.Ã‚Â  While he attended grade school and high school in North Plainfield, NJ, Beach Haven was always his home.
Kurt left North Plainfield the day he graduated high school for Beach Haven, where he lived for the rest of his life.Ã‚Â  Following high school graduation, he enrolled at and completed his Bachelor of Science degree in Environmental Science from Stockton State College.
Kurt's life revolved around the ocean and surrounding coastal waterways of the area.Ã‚Â  He started surfing and fishing at an early age and worked as a lifeguard through high school and college.Ã‚Â  Kurt treasured his time at Stockton where he strengthened the close friendships that would continue for the rest of his life.Ã‚Â  One of his fondest memories was his semester abroad attending the University of Wollongong in NSW, Australia, where he and his American classmates took full advantage of the local surf scene.Ã‚Â  Kurt continued his surfing-based travel for many years, surfing the US east coast, Tortola, Rincon, Puerto Rico and Hawaii.Ã‚Â  He enjoyed a reputation as one of the island's best surfers and gained national recognition from Surfer Magazine.Ã‚Â  He realized the commercial side of the sport was not for him and decided not to pursue sponsorship offers.
Following college graduation, Kurt soon realized that the corporate life wasn't for him and chose to live and work on Long Beach Island as a carpenter.Ã‚Â  He was an exceptionally gifted finish carpenter and had the uncanny ability to deliver unique facets of architectural plans to finished products.Ã‚Â  Kurt worked many years for Dean Harkness Building Contractors LLC.
Kurt was an avid fisherman.Ã‚Â  Like many of us, the transition from surfing to fishing was a natural one.Ã‚Â  All who fished in Beach Haven knew him; he was a fixture on the beach morning, evening, and frequently at lunchtime.Ã‚Â  His fishing skills, and his surfing skills, validated how he lived as one with the ocean.Ã‚Â  While he fished offshore on occasion, he loved in-shore and surf fishing best.Ã‚Â  Kurt was an active member of the Beach Haven Marlin and Tuna Club.Ã‚Â  Kurt was a staple at the club and volunteered much of his free time to tournament weigh-ins, carpentry repairs, and other club needs.
Kurt was also an avid reader of murder mysteries, known and loved by all at the Beach Haven Public Library.Ã‚Â  It was not uncommon for Kurt to take out a book from the library and go home and read it cover to cover in a single sitting.Ã‚Â  Kurt developed a passion for gardening and was an active member of the Beach Haven Community Garden.
Most importantly Kurt was a kind soul.Ã‚Â  Kurt would help anyone with anything.Ã‚Â  All who knew him knew that when they needed his help, he would be there ready to help you in any way.Ã‚Â  Even while he battled cancer, he would put the needs of others before his own and he never felt sorry for himself.Ã‚Â  Up until his final days he continued to spend time on the beach, in the ocean and out on the bay.Ã‚Â  He will be greatly missed by all who knew him.Ã‚Â
Kurt is survived by Dale Lynn Horensky (sister) and John Coyle of Harpers Ferry, West Virginia, Scott Eric Horensky (brother) and Georgiann Bird of Beach Haven, New Jersey, and nephews Reed William and Dustin Edward of Beach Haven, as well as many beloved cousins.Ã‚Â  He is preceded in death by his mother Doris Mae Horensky (Messler) and his father Edward John Horensky.
A memorial paddle out will be held at 8:00 AM on Friday, August 16, 2019 on Holyoke Ave Beach Haven, NJ.Ã‚Â  A eulogy and Funeral Mass will be held at 10:45 AM on Friday, August 16, 2019 at St Thomas Aquinas Church 2nd Street Beach Haven, NJ 08008.Ã‚Â  At noon, on Friday, August 16, 2019 all are invited to attend a luncheon to honor Kurt at Beach Haven Marlin & Tuna Club, 420 N Pennsylvania Ave Beach Haven, NJ.Ã‚Â  Aloha/casual attire is requested.
In lieu of flowers please consider donations in Kurt's name to his favorite charity:
Alliance for a Living Ocean, PO Box 2250 Long Beach Township, NJ 08008 www.livingocean.org