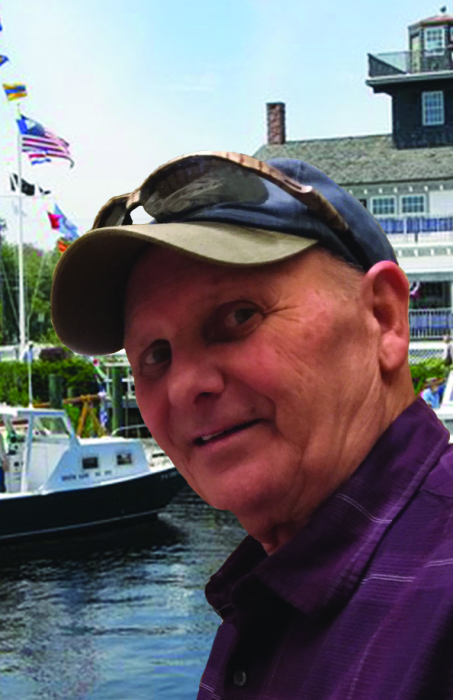 Larry Courtney was a very special person who impacted countless lives, but was always too modest and humble to let others know of his achievements.  Born in September 1950, Larry was a lifelong resident of Tuckerton and Little Egg Harbor. He grew up in a prominent Victorian home on Main Street, and if you lived in town, you knew the Courtney’s.

The Courtney family included Larry’s father Ralph, a man whose immense physical size and ability to hold a conversation with virtually anyone he met, made him a legend in his time. Larry grew up with two younger brothers and the three of them as youngsters were known to keep the community on its toes.

For example, a young Larry once used house paint to spruce up the hearse at the nearby funeral home. There was also the time a very young Ralph, Larry's youngest brother, collected all of the keys from the ignitions of the police cars at the station next door. One of Larry‘s favorite stories was — at about the age of 10 while his father was relaxing in their living room — how he threw a glass of water at his father on a dare... and then ran out the front door, jumped off the porch, and sprinted down the snow-covered Main Street in his pajamas and bare feet... with his father in close pursuit. Needless to say, there was rarely a dull moment.

Overseeing the Courtney brood was Larry’s mother, Pat. Full of personality and self-described as “fat and sassy,” she somehow kept these three active boys and their father under control… Although sometimes it required a swift broom to the backside or even a flying iron skillet breaking through a window.

Larry went on to become an amazing athlete, frequently featured in the newspapers, while serving as captain of both the baseball and football teams at Southern Regional High School. He was an All Star in both sports and inducted into Southern’s Hall of Fame. Although he could have gone to a major university on a sports scholarship, he instead chose to attend Glassboro State to become a school teacher.

Prior to settling down, Larry was an accomplished surfer, and also raced everything from motorcycles to boats to cars. While in school, his pride and joy was his customized ‘57 Chevy, and in later years, his "Courtney-Built" red race car (# 6), with which he traveled throughout the middle-eastern states to compete. For many years, Larry worked in the bay clamming, often with his brothers, to earn the money to pay for his cars and other toys.

Of greatest note, was from the time Larry was old enough to go hunting for deer with his father, to the current hunting season, he was obsessed with spending every possible free moment in the woods tracking down the biggest and best buck with a "monster rack." Most deer, however, he let wander by as he admired their beauty. Larry hiked into the woods before sunup and then made his way back after sundown, spending his entire day in a tree stand. He said that he loved to watch nature, and that he never saw a disappointing sunrise or sunset. And like many hunters, he also loved dogs, including his most-recent pets, Hunter and Sophie.

Following college, Larry worked for 33 years teaching architecture and building trades at the Maple Shade High School. He worked alongside his close friends, Chuck, Bill, Chris, Don, Jim and several others. He also coached the boys' baseball team for several seasons. His career as a teacher allowed him to influence countless teenagers, not only in terms of learning a trade, but also instilling good values and high self-esteem. He was an outspoken advocate for never using tobacco and for staying off drugs.

Despite all of Larry’s personal achievements, his greatest pride, however, was his two sons from his first marriage, Gary and Jeff. From the time they were each born to when Larry passed just a few days ago, the sun rose and set on these two boys. And making things even better, his sons both found perfect mates, Tanya and Marybeth, respectively, and then went on to provide him with five absolutely perfect grandchildren: Carter, Makayla, Owen, Aidan, and Levi. All beautiful, smart, and talented, he adored them all and could not have been prouder.

Larry’s second marriage of more than 22 years was to his devoted wife Susan, who also gave him a stepdaughter Rebecca, a step son-in-law William, and two very active and loving step-grandchildren, Summer and Ethan. Larry was kind and generous to his entire expanded family. Among the many fun times they had, Susan thinks she will miss their annual trips to Disney World and Baseball Spring Training the most.

Larry was also extremely close with his youngest brother Ralph, who shared his interest in sports, cars, racing, and of course, hunting. Barely a day went by that the two didn’t see each other or at least talk on the phone. Larry will also be missed by his in-laws, including Susan‘s mother Lea... Susan’s older brother John — with whom he spent countless hours discussing the early days of professional sports and playing "Mayberry-opoli," the Andy Griffith version of Monopoly... Susan’s younger brother Scott... and younger sister June with her husband David and their lovely daughter Emilie. Larry enjoyed everyone in Susan’s extended family and will be terribly missed by all.

Without Larry, things will not be the same for his family and everyone he knew. He was a hard worker, a loyal friend, a devoted husband, father and brother and someone who always enjoyed having a good time. He was a master at impersonating voices (including the three stooges, Popeye, Daffy Duck, and "Kermit T. Frog here"), as well as just being silly by wearing funny hats or putting on a show with hand puppets that he made from oven mitts. In addition to loving his trips to Florida, he also loved the holidays, and worked particularly hard each year to decorate the entire house for Christmas with every holiday figure and bauble imaginable.

Again, nothing will be the same without Larry, but we will do our best to remember the many wonderful times that we all spent together while he was with us here on Earth... and we will find comfort in knowing that heaven is having a bit more fun with him there, as Larry undoubtedly is entertaining all those who passed before him. Our hearts go out to Larry, our beloved husband, father, grandfather, brother, son-in-law, brother-in-law, and friend to all.

Due to the current pandemic, no funeral arrangements were made. Immediate family only gathered for the burial. A memorial service is planned once the health crisis is resolved.

Please send any condolences to: The Courtney Family, care of Maxwell Funeral Home 160 Mathistown Road Little Egg Harbor, NJ 08087.  Donations may be made in Larry’s name to the New Jersey Conservation Foundation at www.njconservation.org.  We thank everyone for their love and support.

To order memorial trees or send flowers to the family in memory of Larry Courtney, please visit our flower store.
Send a Sympathy Card