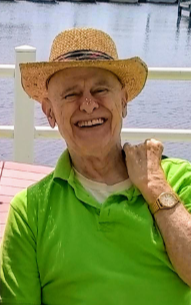 Robert Joseph Steven Horvath was 85 years of age when God called him home, on April 3, 2022. He could befriend almost anyone, chatting with them about most anything. He was known for his quick wit and sarcastic humor which engaged anyone who met him.

Robert, or “Bob” as Dad was referred to was born on March 6, 1937, to Joseph and Margaret Horvath in Garfield, New Jersey. Bob was a mischievous and adventurous child. He had a love for nature and sports early on. He was exceptional in Track and Field and as a Quarterback on the Football team. Bob graduated from Garfield High School in 1955, After high school, he served in the New Jersey Army National Guard.  From here he went on to study Biology (Botany/Environmental Sciences) at Fairleigh Dickinson University in New Jersey.

After graduating with a degree in Biology/Chemistry, he started his first teaching job at Garfield High School as a Science Teacher, and from there worked many years at Suffern High School. Bob had a thirty-three-year career in education. He was an exceptional teacher who brought a passion for science and a love of learning to his students. He spent the majority of his career working for Ramapo Central School District in Suffern, New York, as a Regents Biology Teacher.

In 1957, Bob met (his former wife), Elaine M. Gallagher at Fairleigh Dickenson University in New Jersey. Bob and Elaine went on to have three children, Mary Shockley, Linda Horvath, and Irene Cruz, all of which succeeded him. Bob was an involved father and cared deeply for and about each of his “girls” making them feel as if there wasn’t anything they couldn’t achieve from an early age. He shared his nature loving spirit with them, and they continue to carry his zest for life, adventure, and deep compassion in all they do.

In 1992, Bob retired and spent his time traveling around the world, cruising, connecting with local community activities and volunteering at national parks. Bob loved hiking many local trails, camping, canoeing rivers, swimming, tennis, and any outdoor activity. He was also very involved in church communities, putting his faith in Jesus Christ “into action”, volunteering with van pickup/drop-offs and many other activities which greatly blessed others.

A Celebration of Life will be held at Good Shephard Lutheran Church, 500 Mathistown Rd, Tuckerton, NJ 08087 on April 29th at 2:00PM. In lieu of flowers, the family requests donations be made to www.pisgahconservancy.org, a place that held wonderful memories and experiences for Bob. (Place Robert J. Horvath in the comments when you donate).