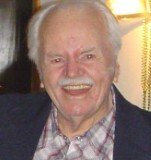 Robert ""Bob"" W. Rutter Sr. 95, passed away peacefully at home on Sunday, April 19, 2015. Bob was born in West Creek and was an active lifelong resident. Bob was a Loving Husband, wonderful Father, and Grandfather. Bob served in the U.S. Army from 1943- 1946 and was discharged as a Staff Sgt.
Bob helped build the Garden State Parkway and was a rural mail Carrier for 30 years in the West Creek Post Office from 1952 to 1982. He was a member of the Tuckerton Mason Lodge #4 F. & A.M., as a master Mason, The Crescent Temple of Trenton and Tall Cedars Lebanon Consistory of Collingswood. Bob was a life member of Eagleswood Fire Co. and helped build the Fire House. In addition he was a member of the Redman Lodge, N.J. State Fire Police, was Deputy Sherriff for several years, and a member of the Pines Hunting Club. He enjoyed many years of riding his Harley and his woods bike. Bob was a former member of the Tuckerton Seaport. He built Boats for 40 years and was well known for his Racing Garveys, both building them and racing them for years with his son's and his many friends. Bob was one of the Founders of The Jersey Speed Garvey Association. In his retirement years Bob enjoyed carving and was well known for his many decoy's. (Rutter Sr.) and was awarded the Hurley Conklin Award. Bob loved his Harley's and rode with his son's and friends till he was 84.
He was predeceased by his wife of 73 years Beatty who passed away February 27, 2015 and his granddaughter Dawn Marie Rutter Termini (2010) and his parents William P. (1977) and Mildred Rutter (1990)
Bob will be sadly missed by his loving children, Robert ""Bob"" Jr. and wife Karen, David and wife Linda and Susan Nickel and husband Eddie, all of West Creek. Bob is survived by 7 wonderful grandchildren, Ed Nickel Jr. and wife Tracy of West Creek, Chanel Caughey and husband Tom of Steamboat, Co, Donnie Rutter and wife Tara of Tuckerton, Ryan Rutter and wife Judy of Galloway, Traci Hixenbaugh and husband Shawn of Myrtle Beach, SC and Tim Cross of Galloway.
Bob is survived by 11 Wonderful great grandchildren, Matthew and Brandon Tolbert of Waretown, Chelsea Nickel of Tuckerton, Tyler and Bailey Nickel of West Creek, Ashley Foltz of Manahawkin ,Dillon and Taylor Rutter of Tuckerton, and Lexi and Brielle Hixenbaugh of Myrtle Beach, SC. , William Cross of Galloway, and many nieces and nephews.
A memorial service will be held on Saturday April 25, at 1:00 at the West Creek United Methodist Church.
In Lieu of Flowers if anyone wishes Donation may be made in Bob's memory to the Eagleswood Vol. Fire Co.#1, PO Box 337 West Creek, N.J. 08092 OR West Creek United Methodist Church